Bowie’s dead. Enough has been said about the resident alien’s unparalleled ability to reinvent himself, his influence on science fiction, fashion and aesthetics in general, his ambassadorial representation of the other, the differently inclined. To me, at first, he was neither Bowie the musician nor any of the other. He was a god in a video game first.

Omikron: The Nomad Soul is probably my favourite video game. It is not, by any rational qualifier, necessarily a good one. It frivolously hops between adventure game, fighting game, FPS, weak puzzle game, somestimes driving simulator, and a few other half-executed ideas. It bears all the red flags of creator David Cage’s future haphazard design principles. But, it was also one of the first games featuring a living, breathing, fully exploreable 3D city, which at the time seemed more or less completely real and almost unfathomably complex.

And it had Bowie in it. Before I’d ever consciously listened to Ziggy Stardust or saw The Man who fell to Earth, I experienced Bowie as the computer god Boz and the lead singer of the illegal, extradimensional band The Dreamers. Even without being aware of Bowie’s body of work at that time, you could feel the fact he was involved in this, and his involvement itself, was something special, a numinous presence in the otherwise garish world of video games.

Boz was someone you’d mostly hear about, a rumour among the populace you were part of. You don’t meet him until much later, and when I did, it was almost profound – not something that happens much in video games, especially not at that time. Bowie was a good actor – something not many musicians are.

Throughout the games, you’d find folders advertising a secret concert by The Dreamers, a band outlawed by the game’s totalitarian government – a time, a seedy dive in the less well-kept quarters of the city. You need to time your visit fairly well to get there. This, here, was David Bowie, in the first and thus far only illegal concert I’ve visited inside a video game. The animation doesn’t hold up well, but the unicity of the experience should still be apparent. This wasn’t video game music – this was a real musician, real music, and still, hauntingly different, congruent with the Blade Runnerish game world, and yet, transcendent. Even in low-poly, ill-animated form, Bowie permeated.

I sometimes fear Omikron: The Nomad Soul may have been the most influential game in my life. It’s not particularly the game you’d want to have at the back of your mind when trying when trying to design substantive content. Design-wise, it’s a disaster. Directorially, a catastrophe. But it is nonetheless beatutiful and unique. Like some of Alan Moore’s more heady and perhaps tone-deaf comics or Terry Gilliam’s barely kept-together films, it is a wonderfully constructed wreck whose beautiful individual components sometimes validate the greater whole. 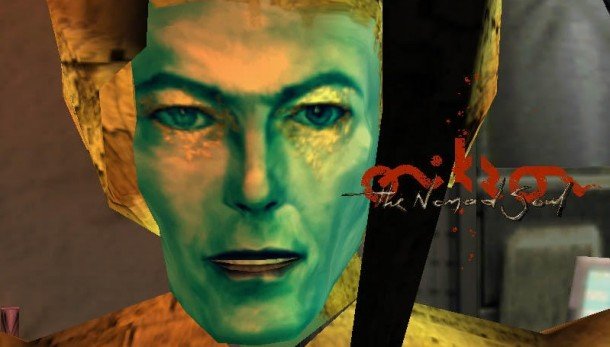 Bowie, I think, was much the same. Particularly in his oft-disregarded 90s phases, which of course include Hours… which was largely the Nomad Soul record. Many of these records cannot necessarily be regarded as his consistenly best efforts, but even the weakest and weirdest among them become unjustifiably and irrationally more due small, well-observed, ineffable components. Things that someone else wouldn’t and couldn’t have contributed. Theory and linear qualifiers start to falter here. Language is not always completely suited to defend the art you actually enjoy.

Bowie was unparalleled in music and most other things he chose to do. The Nomad Soul is far from unparalleled, but the very fact he chose to involve himself in things like this reveals the kind of pioneering nomad soul we’ve lost.