In roughly 36 hours, this will all be over, at least in as far as a graduation requirement is concerned. So here is a conclusion, for now, to the project and its findings (or lack thereof).

I set out to research performative elements in relatively orthodox video game frameworks and, if possible, extrapolate a video game out of all that, and in this I have succeeded. There is a game and sufficient research to support it. The initial question was “How can I induce players to interact dramatically with one another inside a virtual space?” and this appears to have been answered to some degree. There is no absolute guarantee to ‘inducing people to do X’ but the prototype seems to be able to perform it well enough for the most part.

The game, for now, is called Exit, Pursued by a Bear, mostly because a local paper picked up on the working title and is going ahead with publishing it so there seems little point in altering the name for now. Besides, I rather like it. 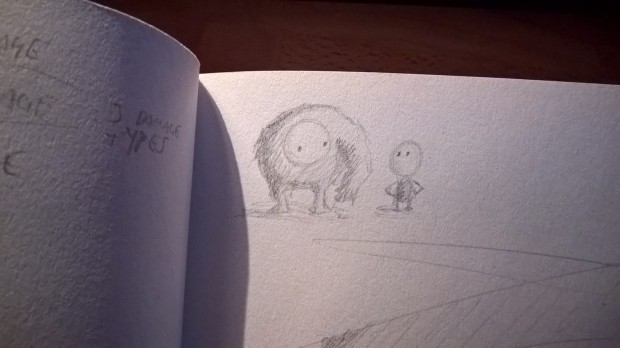 I feel as though I have finished the game rather too recently to cast any sort of objective aspersions on it, but I suppose I could give it a stab. Firstly, I feel I should utter the baseless but persistent feeling that the prototype does not achieve the totality of what I vaguely wished for, even though the actual boxes are all more or less ticked. I was pleasantly surprised by the amount of people who seemed to ‘get’ what I was going for here. Often, it was the Head controls that immediately communicated the objective of the game. This very simple act of digital puppeteering seemed to draw most of the test subjects immediately into the theatrical aspect of the game, and often managed to keep them engrossed for five whole minutes or so.

I have seen some interesting sketches (stopping short of calling them ‘stories’ for now) developing in the game. Most edged towards either ‘mimicking movements to achieve some sort of synchronicity’ while a lot of the other tended towards ‘jump on each others’ heads on push them off things’. The cubes and cylinders added to the empty world seemed to enagge most hesitant players enough to keep them into the game for The Turn.

The Turn is the bit where the entire world fragments and the established relationship is tested. Again, after a lot of animation length wrangling I feel that this development brings just enough diversion to impress upon the players the urgency of the situation but leaves sufficient room for them to express themselves on this subject.

Most interesting, perhaps, is the replayability loop that emerged more or less by accident. I more or less assumed from the outset that for most individuals this would be a game best played once, not in the least because the core environmental effect is ‘on rails’. However, it takes a fair bit to acclimatize to the controls, especially for players new to a controller. What followed was that many players, after having experienced the game the first time, wanted to have another go, now knowing that the world would split and having an inkling of how they wanted to react to that. Basically, they now ‘knew the script’ and went back into the game with an intention to perform. While wholly unexpected, this revelation implies a much larger replay value than originally envisioned. Which possibly shows bad foresight on my part.

In conclusion, this game can be considered a solid first step in a form digital theatre, one which warrants much more research and experimentation, but for the purposes of the research I set out to do, is for now sufficient.